Legend of Galactic Heroes Wiki
Register
Don't have an account?
Sign In
Advertisement
in: Soldiers, Nobility, Imperial Citizens,
and 2 more 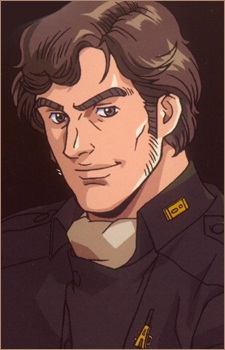 Walter von Schenkopp (Japanese: ワルター・フォン・シェーンコップ) was a free planets alliance Vice Admiral and the most notable leader of the Rosen Ritter, a military unit within the FPA Fleet comprised of Imperial defectors and the children of Imperial exiles. Distrusted by most of the Alliance military, Walter von Schenkopp eventually became one of Yang Wenli's most trusted subordinates.

In Imperial Year 461, at the age of six, Walter von Schenkopp's family was exiled from the Galactic Empire. Together with his grandparents, he emigrated to the Free Planets Alliance through the Phezzan Corridor.

While defending a waitress in a bar from several other FPA officers, Schenkopp drew the attention of admiral Yang Wenli, who had only recently been giving command of the 13th Fleet, with orders to capture the notorious Iserlohn Fortress. Yang decided, at that moment, to put the Rosen Ritter in the 13th Fleet under his command. Despite the flurry of rumors circulating about the disloyalty of the Rosen Ritter, and its current commander, Walter von Schenkopp in particular, Yang decided to trust them completely, and to use the Rosen Ritter as the crux of his plan to capture Iserlohn Fortress. Yang Wenli said, "If he turns traitor, they'll say I was no judge of character. The 'one man hero' will disappear from this world."

At the Fifth Battle of Tiamat, Walter von Schenkopp, led the Rosen Ritter, including Kasper Lintz and Linier Blumart, on an infiltration mission onto Iserlohn Fortress. Pretending to be wounded Imperial officers, they managed to infiltrate Iserlohn's command center and sieze it by taking Imperial admiral Thomas von Stockhausen hostage. Once they took control of the command center, they allowed the 13th Fleet inside the fortress. While Yang Wenli convinced the Iserlohn Fleet commander, Hans Dietrich von Seeckt, that the fortress had already been completely pacified by his forces, the Rosen Ritter swept through the fortress, fighting off the remaining Imperial forces in brutal hand-to-hand combat.

After the end of the war against the Empire Schenkopp remained in the army and in command of the Rosenritter, in contrast to Yang, who retired. Schenkopp was well aware of the fact that he, as a Yang staff member, was under tight surveillance, a fact he treated lightly. After the escalation of the measures taken against Yang Schenkopp had a meeting with Dusty Attenborough, where they agreed upon the need to act. Following the meeting they were followed by the police abd ordered to stop in the pretence of exceeding the speed limit, something impossible, as they were driving on autopilot. Schenkopp changed on manual and they managed to evade the police, however this incident triggered the execution of the plot to intervene in the procedure against Yang and free him. Along with those in Yang's staff who were present on Heinessen, Schenkopp organized the abduction of Prime Minister Joe Lebello and the infiltration of the prison Yang was held in. While Schenkopp and the Rosenritter forced their way through the prison, Greenhill managed to find Yang's cell and enter just in time to save him from assassination by his guard.

With Yang in their command, the rebels abducted Imperial Forces Superintendent on Heinessen Helmut Lennenkampt, infiltrating the hotel he had set as his Headquarters. Schenkopp and his Rosenritter executed the attack, fending off continuous resistance by Panzergrenadier and normal foot soldier brigades on all staircases that weren't destroyed as quick as they should have. Schenkopp himself protected one, forcing his enemies to hand-to-hand combat by spreading Zephyr Particles in the surrounding and then taking the charging Imperial soldiers out one by one, until the operation was completed and they were able to safely evacuate the hotel.

Schenkopp then followed Yang to Iserlohn and again assumed his duties of Fortress Commander. He was aboard the Hyperion during the final Imperial attack on Iserlohn.

Schenkopp remained on Iserlohn as Fortress Commander after Yang's death. He accompanied Julian Mintz at the Battle of Shiva however and led a boarding party onto the Brunhild, declaring that if Julian found the Kaiser first then he could negotiate but if von Schenkopp was first then he would kill Reinhard. In fact he and the Rosenritter guarded the rear while Julian pressed on. Von Schenkopp was struck from behind by an unarmored Imperial Forces sergeant. Although mortally wounded he politely asked the sergeant's name and spared his life, continuing to fight. However, he eventually sat down, unable to continue and died peacefully, considering what he should make his last words and thinking of Rosaline von Kreutzer, the mother of his daughter Katerose von Kreutzer. He was 37 years of age.

"When I was six years old, I fled to this free country, brought by my grandparents. It's already been 28 years, but I remember it well. The contemptuous looks of the customs officials... penetrating as coldly as the wind, treating exiles like beggars. I probably won't forget it until I die."

"If I said, 'the regimental commander of the Rosen Ritter... does that ring a bell?"

"Whether in the Empire or the Alliance, corruption in the military is the same."