The Brunhild is the personal flagship of Kaiser Reinhard von Lohengramm, the Brunhild served as a symbol of both the Golden Lion throne and Reinhard himself.

Service in the Imperial Navy[]

The Brunhild was the only ship of its kind, built specifically for Reinhard von Lohengramm, at the behest of Kaiser Friedrich IV. The Brunhild would serve as Reinhard's personal flagship throughout his life, playing a pivotal role in all of the greatest battles of the era. Although Reinhard commanded his fleets from the bridge of the Brunhild, it is important to note that he was not the captain of the Brunhild. He could order the fleet, to which to Brunhild was a part, but could not directly command the ship itself.

The Brunhild was designed with an emphasis on speed and mobility. Its non-centralized gun placement, however, meant the Brunhild was somewhat lacking in firepower compared to other ships of similar size. Designed to be graceful and majestic, Reinhard always kept his ship right on the front line of each battle, fighting beside his men. The porcelain hull and graceful contours were designed to inspire his allies and terrify his foes.

The Brunhild is notorious for never having been damaged in combat, though did enter into close combat and melee actions with enemy troops on a handful of occasions.

In Norse mythology, Brunhild was a Valkyrie, a woman warrior serving Odin, king of the gods.

Following the death of Kaiser Reinhard von Lohengramm, the Brunhild was decommissioned and permanently moored at Dock One at Odin, where it would become a museum/monument to Reinhard's military prowess. Odin's Dock Two moored the Barbarossa, the flame-red flagship commanded by Siegfried Kircheis. The proximity of these two warships mirrors the deep friendship between Reinhard and Kircheis. 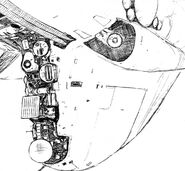